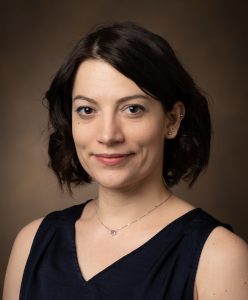 I’m Enikő Ladányi, a linguist and cognitive scientist working mainly on topics related to typical and atypical language development. I completed my PhD under the supervision of Ágnes Lukács at the Department of Cognitive Science of the Budapest University of Technology and Economics on the relationship between cognitive control and language development in children with typical development and with Developmental Language Disorder (DLD).

In 2015 I joined to a Marie Curie ITN project (Predictable) which aimed to find early markers of later language problems under the supervision of Judit Gervain at Laboratoire Psychologie de la Perception in Paris.

Between 2019 and 2022, I was a postdoctoral fellow at the Music Cognition Lab of Vanderbilt University Medical Center under the supervision of Reyna Gordon and studied the relationship between musical rhythm and language abilities in infants and in children with typical development and with DLD.

Since July 2022, I am working at the Department of Linguistics of the University of Potsdam under Isabell Wartenburger‘s supervision as a Marie Skłodowska-Curie Actions postdoctoral fellow. In my project, REGRAMM,  I aim to combine my previous research topics by studying the relationship of executive functions and musical rhythm processing with language development and I aim to develop and validate video-game-based versions of cognitive tasks.